Doom Outside the Box: Ryoujin no Shigoto

One of the most exciting parts of listening to a new band is finding what elements they take from an established genre and push slightly outside of the box. Ryoujin no Shigoto’s self-titled album fits this description, as what initially appears to be three tracks of straightforward doom expands outwards towards other genres and a feeling all its own. For those outside of Japan there is very little information available about the band, with the Romanized name only bringing up an event hosted by GUEVNNA last year, so you’ll have to let the music speak for itself. Luckily it does just that and while it may take a few listens to fully sink in over time this album reveals a true mastery of the power of the riff. 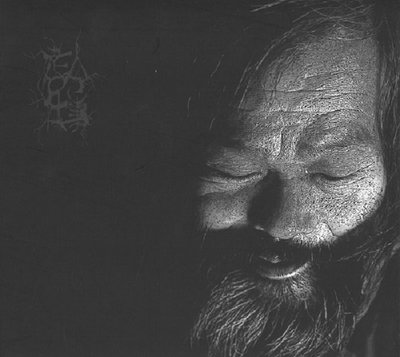 Early on Ryoujin no Shigoto makes it clear that listeners might be in for an album that’s not just your stereotypical doom record as the opening track starts off with soft chants that build up alongside some feedback, ultimately culminating in a dense and crunchy groove that kicks in around the four-minute mark. Once the tempo kicks up some of the band’s influences become clear, as the groove heavy nature of the instrumentation comes in somewhere between Black Sabbath and Sleep with maybe just a hint of Electric Wizard for good measure. The first song is very focused on your typical interplay between guitar, bass, and drums with each element stretching out for an extended period of time in order to really let the sound expand and breathe naturally. This should certainly sound familiar to anyone that’s a fan of the genre and its wide range of bands, but it’s appealing right from the start and the slow-build ups work well without feeling too drawn out.

Though the album makes a strong first impression with its first (and longest song), the other two are where Ryoujin no Shigoto starts to branch out further and distinguishes themselves from many of the other bands going for a similar sound. The second track kicks up the tempo right from the get-go, touching upon atmospherics that give off a desert rock (Kyuss) vibe alongside the more traditional stoner/doom vibes, as you can close your eyes and picture vivid landscapes as you listen along. Around the halfway point of this song the fuzziness fades out a bit and the flute make an unexpected appearance. With the flute leading the way alongside and warm and inviting bass riff, Ryoujin no Shigoto seems to be pulling a little Jethro Tull into their sound during these moments and it works quite well. Chances are that after your first time through the thirty-two minute album you’ll be trying to get a handle on these different elements that add subtle changes to the material, and as you make your way through again additional instrumentation and shifts will pop out.

There are two other aspects of this album that haven’t been mentioned yet but play a key role in what makes it stand out, and that’s the sparseness of the vocals and the overall use of space in the compositions. Where a lot of other doom bands let their singing or screaming take the spotlight and make it a focal point, here there is only soft singing and chanting that appears during key moments and a considerable amount of the album is instrumental only. It’s an approach that works to the group’s advantage as it allows them to treat the vocals as another instrument that twist and turn alongside each song rather than stealing your attention away. This also ties into the band’s approach to writing, which provides fluid transitions and natural pauses between passages. Ryoujin no Shigoto has a clear understanding of when to wind things down and let the listener reflect for a few seconds before switching things up, and it allows each riff to leave a lasting impression.

As someone that consumes a lot less doom and stoner rock than in year’s past due to the sheer amount of similar sounding bands, Ryoujin no Shigoto was a welcome surprise. With an overall style that pulls in the best from groups like Sleep and Kyuss while also pulling in some additional influences that put them slightly outside the box, this trio leaves a lasting impression. Those outside of Japan are likely going to have to put a bit of effort in to hunt this disc down, but the effort is worth it (doing a search for 老人の仕事 should help you find it). The band doesn't have much in the way of social media, but is active on Twitter.