We are a feisty bunch here at Kaala, equal parts passion and piss, as valiant as we are full of vinegar. Which is why we love the shit we do: this music thing is intense stuff that, especially in a live setting, looks like a fuckin' brawl except fists are punching for the sky instead of faces, and smiles - or, more frequently, brvtal frowns of jöy - are plastered across the participants' faces.

"Gimme those riffs!" we screech in unison. "More drums of righteous thunder!" we insist, vociferously. "MOAR DROOL!" we demand of the vocalist as flecks of spit adorn our cherub-esque faces. No one ever said Rock & Roll was ever pretty, and you know what? We revel in that perhaps contradictory at times but almost always life-affirming character of underground music, and so when we heard that the rollicking ne'erdogoods of C.O.F.F.I.N were coming to town, we were, as always, more than just a little bit enthused to talk with them about the upcoming tour!

Of course, I kind of dropped the ball on actually getting an interview with them done on time, but hey, better late than never, right? So check it out below, but more importantly, find where they're playing near you and GET INTO THE PIT!

Matt: So… can you tell us what a Gronk is, and who it is that its referring to in the case of your EP On the Gronk? Or is On the Gronk just a statement in itself, like pain in the ass?

Ben (Drummer): Gronk is an Aussie term, our good mate and guest singer Jackko says it’s an old jail slogan. However It’s always been part of our vernacular growing up.

It’s wonderfully flexible. One can use it as a noun, adjective, verb... it’s very handy.

Essentially, it is a title you give to someone who is just an all round dickhead/shit cunt. Similar to what you’ve mentioned but with some Australian sprinkle: that guy is a pain in the arse... that bloke is an absolute gronk.

However, it can also can have the meaning of being given the short end of the stick or having a shit go.

We have been ripped off, let down, and very rarely given a leg up in the business so consistently throughout our adventure as a band since we were 12 years old, that being put ‘On The Gronk’ is kind of the satirical theme of our band.

Your Facebook page says that On the Gronk is a “special tour edition EP” and I have no idea what that means. Could you elaborate?

Basically we released the EP in Europe and the US before we set it up for listening in Australia. Part of it was because we were just about to tour those places and didn’t feel like we’d be able to give it a proper release at home before we left. But also we thought it’d be a bit of a laugh to put Australia ‘On The Gronk’ a bit and withhold it from them until we returned.

Australia can be a really bad offender of overlooking the value of it’s own creative talent; overseas artists seem to carry an illusion of prestige here. A lot of the time the response we get from foreign venues and audiences is way more positive... but maybe they’re just victims of the same oversight.

The Asian leg of yr tour is pretty extensive: 9 dates in Japan, 10 dates in China, 2 in South Korea, and “more tba,” and all (so far anyway) in the span between April 2nd and April 30th. That’s pretty fuckin’ hardcore! Are you guys that used to the road, that crazy, or a mix of the 2? Regardless of the answer, kudos on taking it so far into the red!

For us, playing and performing live is the best shit ever! It’s what’s got us started and will forever be what keeps us going, so the more gigs the better. We like the challenge, we like it rough, and wanna make every day as big as it can be. I think that is an attribute of most Aussie bands (or at least independent ones) because they are so isolated from the rest of the world that when they do get a chance to play overseas they wanna rip in as hard as they can while they can. I remember hearing some crazy story about how Hard-Ons once played more gigs on a tour than actual dates they were away. Like 30 shows in 28 days or something. That could very well be a made up story, but to me that was the coolest thing ever.

Follow-up: I’m guessing you’ve got some connections in each of the Asian scenes yr hitting - care to elaborate on your relationships with the region?

Will and Alfie from Scrotal Vice and Scrotal Records are our legendary mates and lifelines to Japan and China. We all grew up in Sydney playing in various bands together and putting on shows and they have essentially booked every gig on this tour for us or put us in contact with the right venues/bands needed to set shows up. In addition to Scrotal Vice, Will plays in the Japanese band Palm, which is one of the most brutal and in my opinion best hardcore bands going, and Alfie also plays in Struggle Session that is based in Beijing who we are hella excited to see and share the stage with. Both of them are super switched on blokes and have an extensive knowledge and appreciation of their collective scenes, so we totally lucked out with them generously jumping onboard to make this happen.

Follow-up 2: Got any dates, venues, or bands from each region that you’re especially stoked for? Japan’s a pretty mature scene, but both China and South Korea’s scenes are far younger - it’d be cool to hear yr take on what’s going on over there!

To be honest with you there isn’t one venue, band, or booker that doesn’t sound bloody awesome. Flat Sucks and Scottish Fold are two bands from Japan Will has showed me a few times that I’m damn excited to see. I’ve had a few friends who have travelled in Japan that have told me El Puente in Yokohama is an epic venue.

I’ve seen some photos of GBN Livehouse in Seoul that’s run by Yuuying Lee and that place looks like it’s the absolute ideal punk/HC venue: tight space - loose atmosphere. And as I mentioned earlier, we’ll be doing a few shows in China with Struggle Session who Alfie plays with and that will be a non-stop party to look forward too.

The underground music scene in all three countries is phenomenal, I wanna take on board as much of it as I can and bring it back to Australia.

Super basic question, but what’s up with the name C.O.F.F.I.N? Also, do you intentionally omit the final period, the one that I expect to come after “N”?

Yeah, one of our guitarists, Arty, always pulls us up on it and asks why we don’t have it there. I never knew it was the grammatically incorrect to not have it...is it?

I think it’s just an OCD/aesthetic thing, looks more balanced without it.

What did the guys in Scrotal Vice tell you about us?

From I’ve heard and by the fact you’re dedicating effort to our band of mongrels, KAALA is a collective of characters submerged in the sub cultures of Japan (particularly the music scene), doing a bit of everything that makes it the motor that it is. Playing, reporting, promoting... keep it going.

That’s a pretty intense tour photo you guys have, with the ocean and the knives and the horses. Any story behind it?

Snuck those machetes back from a trip I took to Papua New Guinea, the horse is over 50 years old and from a long gone carousel ride. The arrangement and idea is just the product of the nonsense garbage thought we think is funny and good for a laugh.

Describe your ideal pit during a set that you are playing.

A mixed crowd of guys and gals, young and old, rowdy as hell but on the constant lookout for each other. There is nothing better than a wild pit collapsing in on itself in a bundle of sweat and beer, and then seeing the rest of the audience run in to pick them all up and all join in again.

So that's our brief but fuckin' sick interview with Sydney's punk ragers C.O.F.F.I.N. Hope it got you stoked for sweating on each other and slipping on spilled beer while helping someone get up as you yourself get knocked down by someone else jumping off the stage! 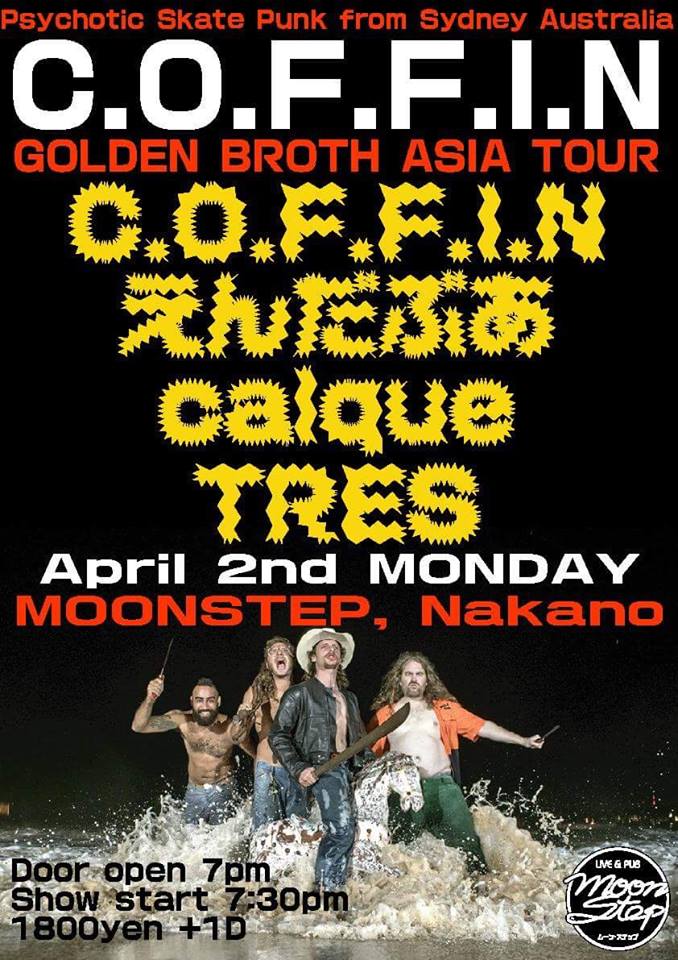 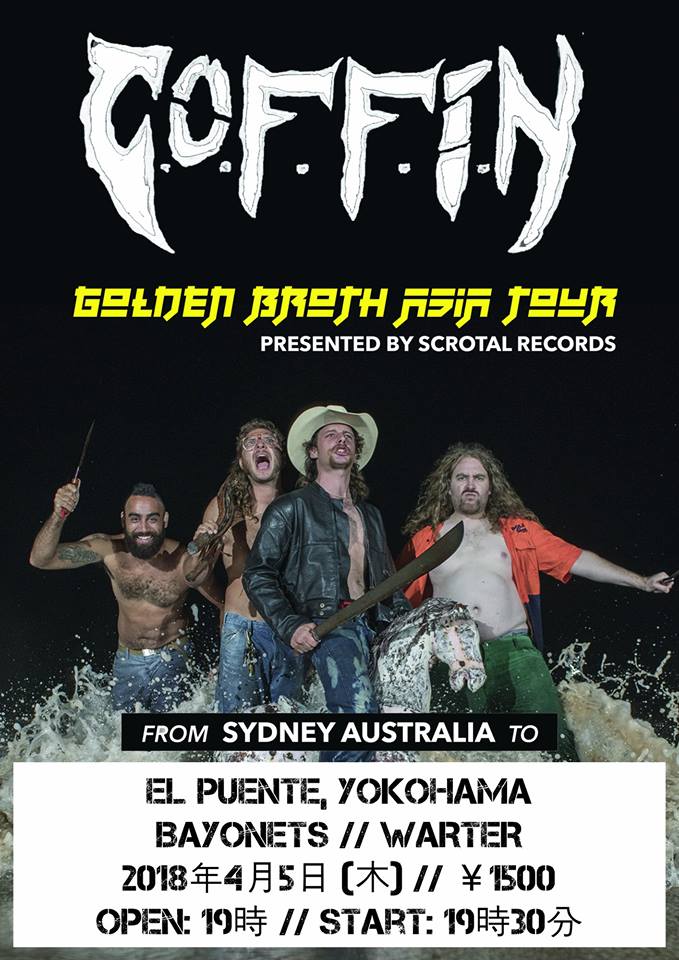 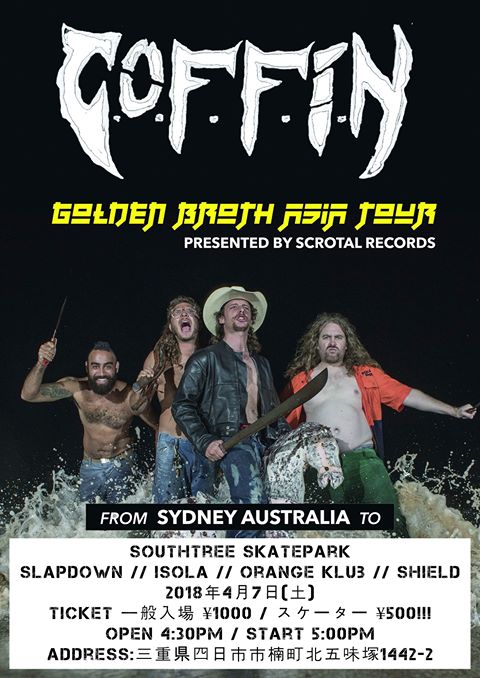 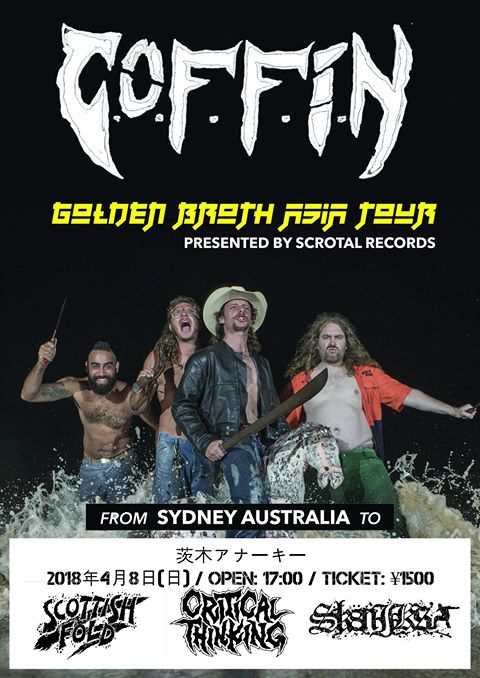 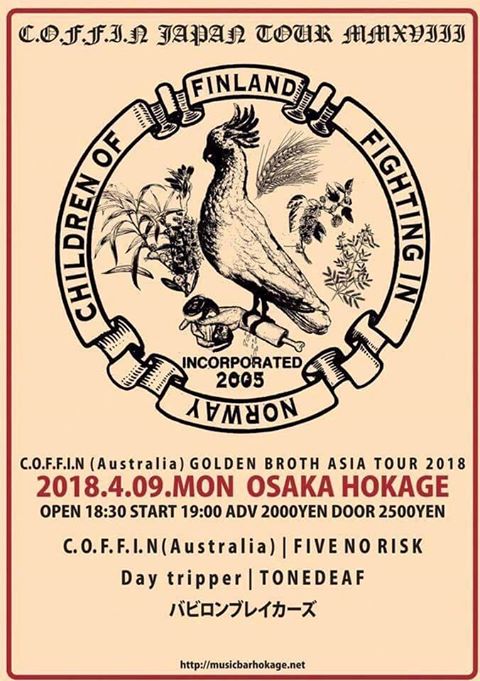 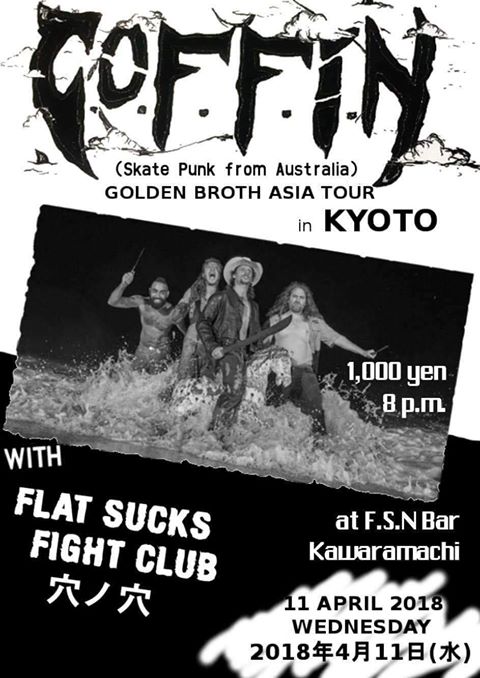