Over a decade ago in the Ukraine, two brothers started writing Death Thrash songs together. But shortly after, they also discovered bands such as Dead Infection and Carcass which changed their trajectory toward the blood drenched autopsy rooms of Goregrind. Eventually one of these brothers would move to Japan and, over a decade later, Crash Syndrom was reborn.

Crash Syndrom’s first full length, Postmortem Solutions to Mundane Issues, was released a few months ago on Obliteration Records. Since its release, they’ve been playing multiple gigs per month in and out of Tokyo with no sign of slowing down. Stefan (Guitar and vocals) shreds with a proficiency honed by years of practice while his Carcass-style vocals and gutturals provide an aberrant layer over the riffs. Takahiro (ex-Defiled) sits behind the kit lashing out blasts between mid-tempo beats, expertly maintains rhythm. Most recently, Tomo (Fatal Desolation) has joined on bass to give the band a meatier sound live. True to form, Postmortem Solutions to Mundane Issues provides 16 songs and runs at approximately 21 minutes total, with a very special secret track at the end. At its heart, their debut full length is a fitting tribute to Goregrind pioneers such as Carcass, Dead Infection, and Pathologist.

Speaking of pioneers, it just so happened that Crash Syndrom’s album release gig at Shinjuku Dues coincided with Jaro’s (ex-Dead Infection, Meat Spreader) vacation in Tokyo. Much to the surprise and delight to everyone, he joined Crash Syndrom to perform vocals for their cover of Dead Infection’s “Poppy Seed Cake.”

“That was a big closing of the door on that era,” Stefan told me one night in a Saizeriya where he, Takahiro, and I had dinner and more wine than is socially acceptable at a "family style" restaurant. “Being influenced by them, writing the songs, and now he kindly came to our show, watched us play, and sang with us,” he continued, “so it was like the whole era ended. It was the best closure for that.”

So if the era which started half the world away in Ukraine over a decade ago has ended, what’s next for Crash Syndrom? “Our second album’s songs are already done. We’re practicing them to get ready for recording sessions,” Stefan replied. Though full details are still under wraps, they do plan to release a new single very shortly. Furthermore, we can perhaps expect a slight change stylistically.

“I decided to write the best of my current self and deliver what I believe is like the second sort of Carcass albums. Like Necroticism when the riffs got a little bit surrealistic, when the songs are so long. When there are a lot of interesting lyrics, not just gory stuff, but interesting lyrics and vocals going inside.” Stef explained, “So, that’s what we’re aiming at now. It’s not going to be as extreme as the first album maybe, but it’ll definitely appeal to any extreme fan.”

So if Postmortem Solutions to Mundane Issues is an admittedly nostalgic album, I get the impression that Crash Syndrom’s next full length will be a bit more personal for them. Half way through our third bottle of wine, Stef told me about the time he went to a local medical university’s free anatomical exhibition. “I remember I went with my high school class, I was already into gore and stuff, and we saw the embryos in a jar. There were a couple of cadavers and they were really stiff and dry. And you could touch them and play with them. Being able to experience that real gory stuff gave me a better understanding about the atmosphere. If you want to write about cadavers, you’re not going to have a purely blastbeat song. There’s something mystical about that. Blastbeats are about aggression, but when a body is laying still like that, it’s creepy. Not in an aggressive way, but deeper. It’s not just about death or blood and stuff like that, it’s about the world beyond.”

Crash Syndrom’s next full length is already sounding more ambitious and interesting, gore and all. I’m looking forward to hearing their upcoming single. In any case, Goregrind fans should head on over to their Bandcamp page to pick up their demo and Postmortem Solutions to Mundane Issues. In addition, you can catch them this Sunday at Kaala’s second Slaughterhaus show at El Puente in Yokohama. Be sure to bring your medical dictionaries! 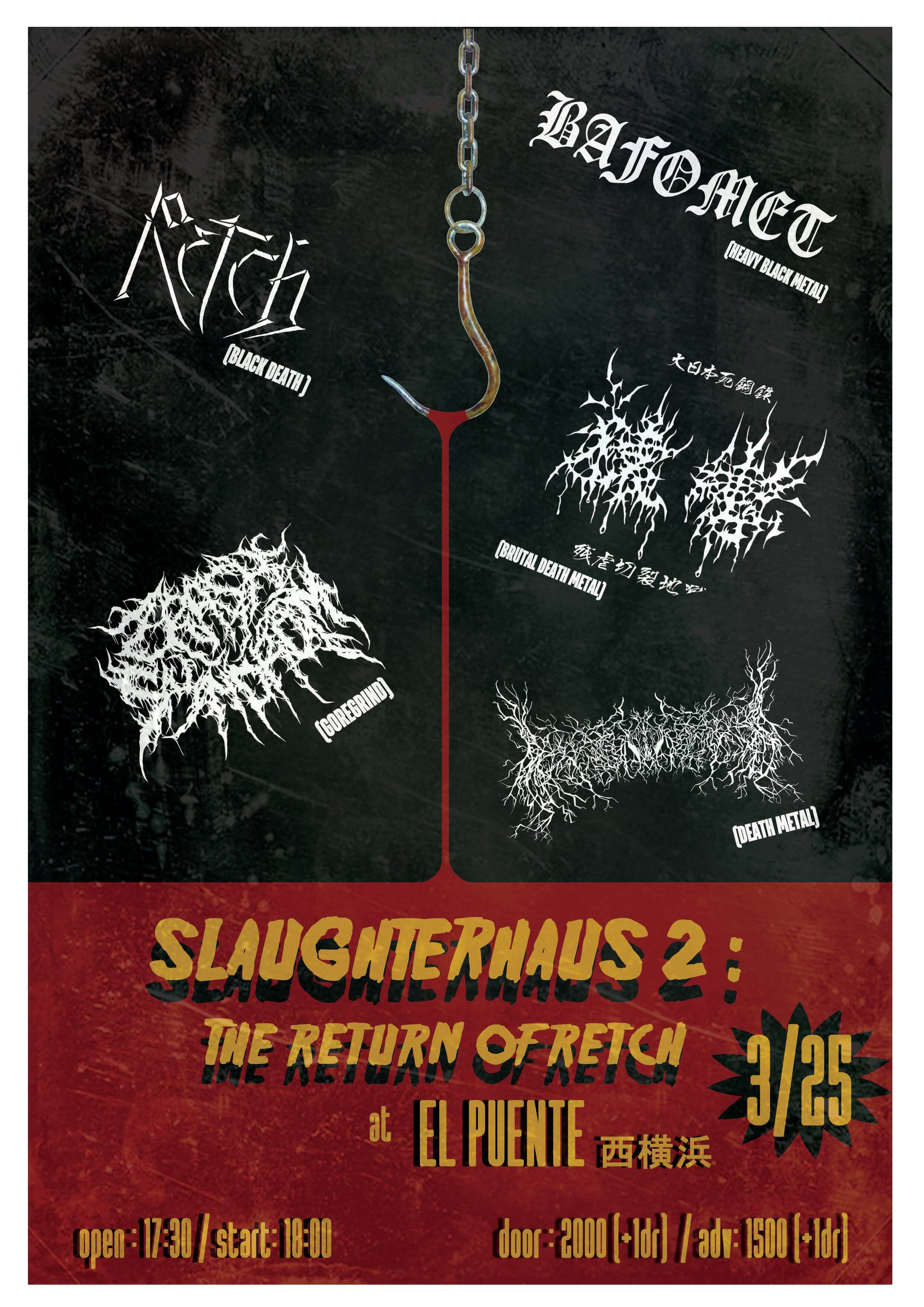 Slaughterhaus 2: The Return of Retch