It happens frequently enough in Tokyo, but sometimes there's just a perfect storm of events that blows through town, one that sucks you up, shakes you around, and spits you out with nothing but a shit-eating grin plastered across your battered face. That storm came through town again this weekend, showering all those in its wake with blood, sweat, and beer.

March 27th, 2015: Blood Rite Vol. 8 @ Nakano Heavy Sick Zero w/Neuroticos,Retch, Self Deconstruction, Legion of Andromeda
First up was, of course, the 8th installment of the now-kind-of-long-running Blood Rite series. As I mentioned a few posts ago, I believe, I wasn't exactly booking this show like I normally demand it be done by giving myself only about a month to make sure all was in place. For those of you who don't dabble in event organization, yes, it can easily take that long. Its kind of wild, when you think about it, that even when you know the venues, know the bands, know the system in general, that something as seemingly easy as (lets face it) throwing a party can actually be so fucking involved. But it can. And frequently is... especially when you don't allocate the time that you know it takes to do something properly just because you're a little trigger happy. So, I've been developing a nice ulcer for the past month or so while worrying about getting all this shit together so that I don't end up with a huge hole burnt into my pocket with nothing to show.
Fortunately, pretty much everything went great. Neuroticos ripped into the audience at about 730PM with a very heavy dose of blasting, old-school death metal. I can see whyCannibal Corpse tapped them when they last came through for a tour. Retch was up next, and we careened through 7 songs including 1 brand new one that goes by the name "Cobalt." Self Deconstruction followed us, for their 2nd show as a 3 piece after their male vocalist ducked out. Too bad to see Shimano-san go, but they've not lost any bit of their intensity.

Finally came the headliner, the Italian/Japanese duo of Legion of Andromeda. Their album was released relatively recently, and I had listened to it a number of times through - incredibly heavy, minimalist, blackened noise. And its great on disc. But nothing really prepared me for their live show, all full of strobe lights and more feedback than you could possibly shake a fist at. Definitely can't recommend their live show to those sensitive to light, but sure as shit do to anyone else.

It all went well, I basically broke even, and everyone had a good time out at a place that doesn't usually get shows like this, Nakano's Heavy Sick Zero. Very cool spot, with a great sound set up and a decent bar that kind of reminds me of Pumpkin out in Yokosuka.

That was Friday, and only the beginning. Saturday saw some very excellent brunch courtesy of the Canadian-owned Good Honest Grub over in Shibuya, drinking some great craft beers at The Watering Hole in Shinjuku, and getting a whole lot of hearing damage atEarthdom thanks to Endon, Full of Hell, and Merzbow.

At ¥4000 it was a little steep, and the scenesters sure came out in force for this one. If it had only been Endon & Merzbow, I'd probably have looked around for another show, but the addition of Full of Hell made it a pretty attractive event and Endon really is pretty great. Merzbow, however, tends to draw out people looking for a spectacle - "Oh, look!" they say. "Its not real music!" they coo while basking in the perceived glory of actually venturing into a decent venue. "He's so avant!" they declare with the force of 1,000 suns. Then the show ends, they quickly leave without saying much or talking to anyone, leaving behind a big lonely void of nothingness where maybe someone would've cared if they had just made an effort to not be such an introvert, and are not seen again for months if not years. That might sound like I'm discouraging people from coming to shows, or that I'm elitist or something. Really, more than anything, all I want is a bunch of cool people who don't know each other to get along and listen to some good, loud, music and have a few beers. Don't lurk. Its annoying. Engage with people around you - you'll be happy you did, and I won't have nearly as bad an impression of you. 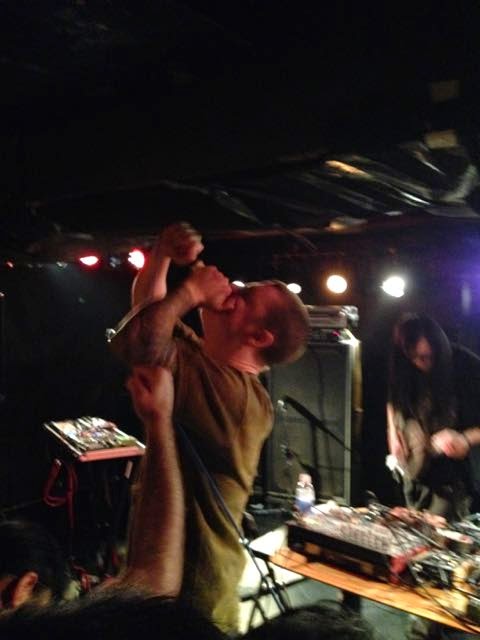 This was the better of the 2 Earthdom shows this weekend, I won't lie. Personal taste probably factors quite heavily in that statement, but while I do enjoy experimental noisey, junky stuff, I like a big ol' slab of Black Metal with a side of Death a good bit more. This was the 2nd date on Impurity's Japan tour: they played the Socore Factory in Osaka with Evil andFramtid in addition to Sex Messiah the day before.

The lineup promised to be at least pretty good, and it sure delivered. Anatomia is always crushing, and it was good to finally see Sex Messiah (featuring Udagawa of Terror Squad &Another Dimension), but of the opening acts Cataplexy was definitely they one to be there for. Searing black metal that gives me hope the lost sounds of bands like Fenrisulf may still be lurking in the deep dark somewhere. Impurity really took it to 11 as I was hoping they would, screeching & being all troll like for a little over 40 minutes. Great night to end this weekend of noise.